The blanket of shame is done! Well, other than the ends. I was hoping I could show you the blanket, but there just no way I can get it done tonight. Send sweet death soon…

Enjoy my pets being silly:

Abraham reminds me to brush my teeth. He also supervises. 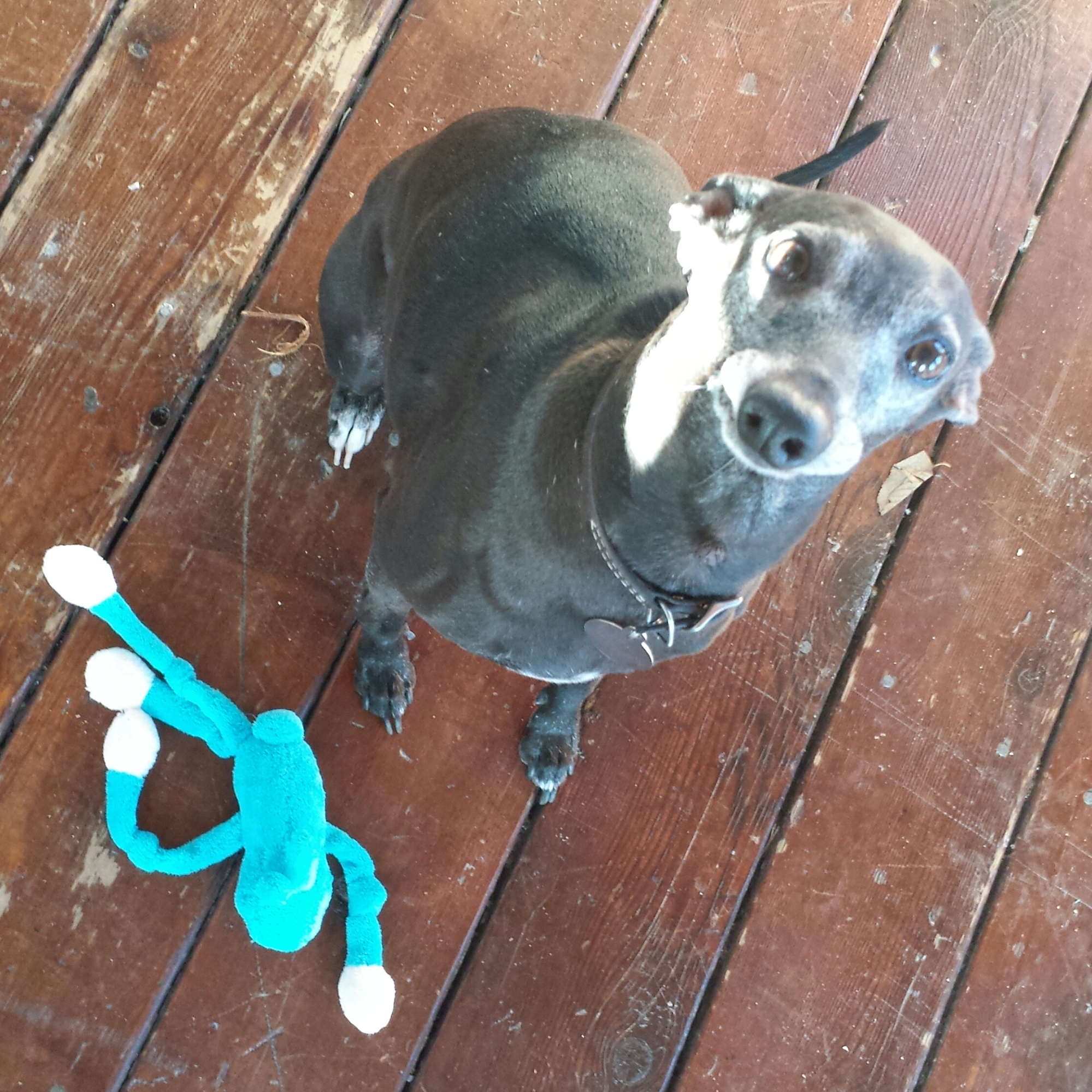 Angie is very proud of her new bunny.

Silence means I am hardly at work on my WIPs. My stash busting blanket has become a quest for insanity as it continues to grow. Originally, I made it without stitch markers, which I am sure you can guess went terrible, because I am an idiot. Also, like 2 years ago. Well, it festered for a while and I really started to crack down on these past few weeks because I am so sick of seeing it laying there with a bunch of yarn in pieces too short to use for anything else. So here we are, about a foot more to go:

Angie was trying to tell me something, something about a tennis ball…

it’s so nice outside, don’t you want to throw the ball around? Huh? HUH???

Yes INDEED kids, the weather has broke around here! I am currently in a bikini (might be a lie) getting a tan (probably not a lie) next to an open window (totally the truth). So, as much as I’d love to stay and chat, I have a date with a stinky greyhound and her filth tennis ball. We’re going outside! 😀

You’re terrible with the weather.

I believe it was, oh, two days ago, was 80 degrees and humid. And now, we are in the 50’s, if we’re lucky! Bonus if there is sunshine! Who the heck plans this stuff? I know it’s September, but seriously! Calm down, Illinois, you’re drunk. Go home, take a pill and lay down. Pluto is not a planet. How much did you drink?

Anyway, apparently it is FALL RIGHT THIS MINUTE YOU GUYS CEREALLY, RIGHT THIS MINUTE. So my husband and I hit an apple orchard and got some (duh) apples, cider, doughnuts, fudge and possibly diabetes. I can make that joke, right?

We had a great time, I completely forgot my phone at home so I have literally no pictures of this grand outing. Which, in hindsight, was all right. The place had just opened for the season, so just the store area was open. No corn maze or hay ride or petting zoo yet. Damn. Also, we’d need to borrow a kid if there was a petting zoo, because you bet your back end I’d go in there to pet the baby goats and whatnot. It’s the kind of thing you need a kid to get away with though, it’s weird to see some almost thirty year old squeeing over baby animals. That almost thirty year old being me. Don’t judge me. I like animals and I like to pet them.

I did get something productive done, however, I finished the Road Trip Scarf! I wrote about it’s beginning here and I got stalled by not calculating the right amount of yarn needed. Even after 3 skeins of 145 yard yarn, I still needed to borrow from my stash for the tassels and flowers. I went tassel crazy, not going to lie. 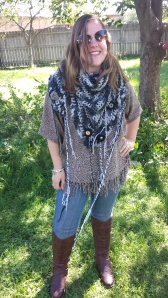 I PEED IN THE POOL!

I was sort of inspired by the shirt I procured the other day. Fringe is back, baby! I love fringe! So I went nuts with the tassels. Instead of weaving in any ends, I just added a few more strands of yarn and braided them together. Best idea ever. I got the buttons from my grandmother’s stash that I inherited.

love me some UGLY yarn! I was dying to think of a project for this yarn. 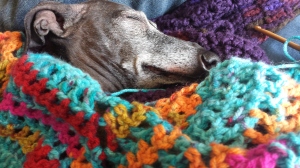 Tomorrow is that husband and I’s “dating anniversary” which is silly to celebrate, since we’re married. But only freshly married. Like, we still haven’t managed to squeeze out a honeymoon yet. So we’re going to celebrate that for the last time. Probably dinner and drinks and fart jokes. You can’t go without fart jokes. Ben Franklin rolled with the fart jokes and he’s on the $100 bill.

Keeping it classy over here in Illinois,

Despite my god-awful last couple days and my insane schedule I have been crocheting away. It’s kept my mind off of things and I’ve made some decent progress. I will admit, a stuffed-crust pizza, ice cream and a lot of Jack Daniel’s has made things easier. It’s a weird ritual. Every problem is solved with stuffed-crust pizza, whiskey and ice cream.

Anyway, I feel better. A little lonely, but better. Angie is doubling her cuddle efforts.

So here are my WIPs,

THE BLANKET OF SHAME:

it’s a bit of a mess, but it’s getting there.

This poor blanket, a stash buster that just would not be square. I’ve frogged quite a bit of it and reworked it. It’s square so far, thank God! Hopefully I will have it done before next year…maybe…? I made the new version a bit larger than the old version because seriously I have so, so, so very much yarn in my stash. And I’m using stitch markers! I’m a big girl!

THE…PONCHO? RUG? I DON’T EVEN KNOW AT THIS POINT: 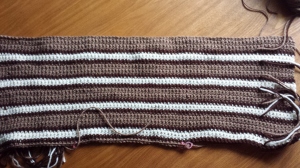 Well, I needed a new distraction and I needed it now, so for some reason I decided I wanted to do a single crochet poncho type thing. I really wasn’t making brilliant decisions at this point. I guess this would be part of the back. I dug up the yarn leftovers from this project and just whacked away at it. About at the point pictured here I decided maybe having two WIPs that were long term and single crochet was not my best idea. It might end up being just a rug or something. I’ve been itching to make a rug and it’s kind of small, but nothing some border work can’t fix. Also, I’m not sure if I have enough yarn, nor the will to purchase more of the same dye lot. That one’s on the back burner. 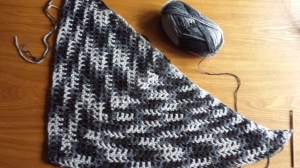 finally, I decided to make a quick project!

This scarf is HOT on the Facebook group I follow around. I swear, 10 finished scarves get posted per day. They’re pretty darn cute, the final project and instructions are from Zooty Owl, and the link to the pattern is here. Nevermind how dull it looks right now, just go get that blog some clicks and see for yourself. They are adorable. I don’t know, nor do I have any contact with Zelna Olivier, but I think I might pay some attention to her blog. You guys first though. I haven’t been keeping up!

I’m hoping to have this guy done this weekend because my husband and I are hopping off to an apple orchard to get some apples, cider (no alcohol, promise! I’ve had enough!) and at least 15 caramel apples. I have an apple addiction, I swear. If I don’t eat them often enough, I have dreams about them. Not even kidding. I love apples. So does Angie, because she is crazy. Since she has no teeth and she doesn’t like apple sauce, I, um, well, um, baby-bird it to her. Use your imagination. How would you resist a cute pooch begging for an apple??

So I’m going to make some tea, check out your blogs, crank out a few more rows, go to work, come home, crochet til I drop!

P.S. I also made a poo-necklace and snuck over to my friend’s work and shoved it under his wiper on his car. Because I’m a good friend.

Yesterday I made ciabatta and I apologize for not posting it. While it was going through it’s stages, I was fiddling with the Athena 2000 and after about 3 hours into fiddling: 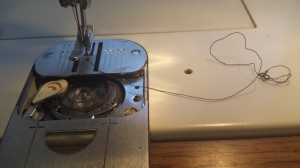 “throw your arms in the air like you just wanna drop kick a machine!”

I just couldn’t take it anymore and had to take her into the shop, the closest one being 30 miles away. So I got a bit sidetracked and I will post about that later. Onto the ciabatta!

coffee. step one is always make coffee. all my blogs should start with “today i arose from mine bed and went forth and made coffee” -sayeth brittany

First thing I had to do was pull the poolish I had made the day before which you can read about here out of the refrigerator and let it warm up for an hour.

Then I assembled together the final ingredients.

the actual step after this was “drink coffee”

Let me assure you, dear friends, this was a heck of a time to mix. I had to add more water than I thought, which I DESPISE doing. I always try to add less flour in the beginning because it is so much easier to add flour than water. I blame it on the fact that we are under an arctic chill here in Illinois and the house makes the desert seem humid. It’s so bad, I have to water some houseplants twice a week.

sure, that seems like a reasonable excuse. clearly, it was ALIENS!

Anyway, I had to fight with that dough to get the right consistency and it was not exactly my favorite thing ever. But eventually, it started to behave.

this is a sticky ball. stop giggling. this is serious. 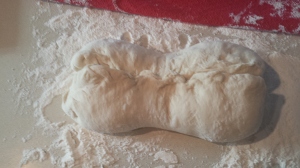 an hour later we’re bursting at the seams. yeast cells are such little piggies

look at that bubble. that is a delicious bubble.

setting up a couche, or as i like to call it, a towel that is bunched up so the dough doesn’t stick

is when I finally called around about the sewing machine. Being that the place closed early and was forty minutes away, I decided to rush things a wee tiny bit. I originally was going to use my peel, like I’m fancy or something, and bake them two at a time directly on the stone. To save time, I put all four on sheet pans and just rotated them for baking.

and….delicious! can you see the hole? that was where the thermometer went.

The bread turned out very tasty, but still not as hole-y as I would like. The crust was beautiful. I mean, spot on A+ crust. But…oh, the crumb. It was good, but just not quite there.  Again, I am blaming the low hydration. Something I am going to have to play with. I might try again Monday…

Have a wonderful day, everyone!! 😀 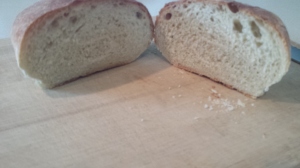