When I lived by myself, I had two enormous black couches. One was black velvet and I had found it on the side of the road. A leg was broken off, but it was nothing some boards couldn’t fix. My other one was a pull out bed that had to be 50 years old. Huge, heavy and very tired. When my then fiance and now husband and I decided to move in together, the couches had to go. Unfortunately he had to work that day, so I had to call…my brother…

the dream team up in here…

After begging, threats, insults and swear words, I finally convinced him. Well, I promised to make coffee. That worked. Now, whenever more than one Glaser is in a room, it turns into a “who can make the other person pee themselves laughing first?” competition. Have you tried carrying heavy objects while laughing hysterically? Moving furniture with my brother was obviously a terrible idea.  Also, the door layout of my apartment was a terrible idea. When the front door to the building was open, it blocked my apartment’s front door and the only way around this was dragging the couches up a half flight of stairs and shoving them back down. You can see why my brother was not terribly keen on this. When the logistics of this long fart of an adventure were figured out, we both started right in. Insults, a rainbow of curses, self depreciating jokes, threats, lamentations. We were both actually working together and almost done when…the couch wouldn’t fit through building door.

Did I mention it was really hot that day? My brother was half way up the stairs, I was fussing it out the door.

We threw our arms in the air, begged God for sweet death, cursed the couch, the door, the apartment, the stairs, each other.

And then I told him a new plan (turn the couch the other direction) and I laid it out to him.

“What do you think of the plan? Should we try it?”

He looked me dead in the eye and said “Well, the first step to failure is trying.”

I lost it. I howled for about 10 minutes and finally regained my composure, told that couch to GTFO and moved on with life. 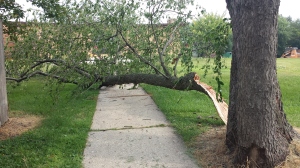 a few feet to the left and we would’ve gotten a new fence for free. WAY TO FAIL, TREE. WAY TO FAIL.

The phrase has have several different variations throughout the years, but at the core, it’s the same. Doesn’t matter how smart, clever, awesome, pretty, nice, whatever you are. You can’t fail if you don’t try. With that in mind, I always have a Plan A and a Plan Spectacular Failure of Plan A.

Plan Spectacular Failure of Plan A:

java moss hanging out at the factory

My darling husband purchased the moss for me and had the package sent to work. When it arrived I immediately thanked him profusely and got the moss into water. He told my I was easy to please. Well, he happens to be right. Buy me something green that grows and I’m pretty pleased. If we were all the same and had the same interests, we’d all be pretty boring.

I got home and followed my plan(s) 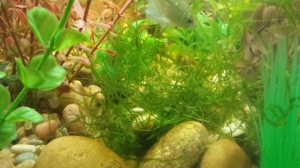 Plan A, with fish photobomb 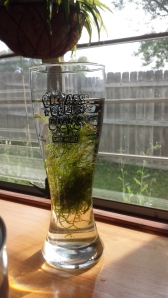 Plan Spectacular Failure of Plan A, in a Big A** Beer Glass

And now we wait to see how much java moss I manage to accrue!