Good morning! The sun is shining, the birds are at the feeder, the amaryllis is in bloom!

if you don’t think that is beautiful, go see a doctor

So far two of the six rumored flowers are up! I’m tickled! Also my goofy christmas cactus is producing buds AGAIN, even though it has literally flowered three times this year. It flowers, drops the flowers, goes quiet for a day or two and then WHOOP back to making buds. I don’t ask questions. Better than the misbehavior plants, the aloe vera and the seedlings.

Speaking of the seedlings, a few brave tomatoes have decided to stop being turds:

whatever. i sow when i want! choo don’t know me! 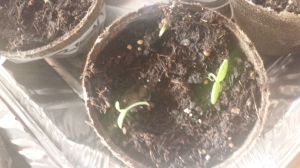 I don’t even want to talk about what a bunch of butts the bamboo is being. Not like I really even wanted to keep them, but they are just being brats! Ok, I guess I did traumatize them, but come on. Grow some roots!

On another topic, I am about to get some kefir grains. I  would much rather have Kiefer Sutherland, but ya know. As Mick says:

are you a rolling stones fan? I HAVE A SURPRISE AT THE END FOR YOU!! 😀

On another topic, Aspiring Tranqulista, as she is known on Facebook; I am not going to hand out her real name like candy, is sending me home tomorrow with kefir grains. I did ask her if she had a link for me to link to, but just search for her on the FBooks, she’s there. She doesn’t blog, which is kind of a shame to be honest. She’s very clever.

Regardless, I have a bit of mixed feelings about my new children (kefir is alive) and I hope they get along with Francine. I’ll probably name them, because I am a dork. But they really do best with milk* and I don’t really like milk. For two reasons. One, I don’t like the taste. Honestly. Two, I don’t like how it’s produced. I don’t want to get on a soap box here, but I do really try to avoid eating meat and meat products as much as I can because of factory farming. I’m not going to get into it now, but ugh. But she swears by the stuff, so I am going to at least try it. Worst case scenario, I will give them to someone else. Best case, I can find some relatively inexpensive milk that is not made with tears and beatings. Ok, this got dark. Let’s brain bleach with some cute animals!

*yes, i’ve looked in to water kefir and how to change milk based to water, but as a newbie i’m going to stick with milk until i get the ball rolling…then we’ll see.

the best part is how excited he gets! 😀

I am excited to try the kefir, but like I said, we’ll see how it goes. I am always willing to try new things and disregard them if I don’t like them.

Such as my regrow romaine project, I am pulling the plug on that because all the romaine did was bolt:

i know it’s hard to see, but they went to seed.

I am going to release them to the worms. They will enjoy, I am sure! It was fun while it lasted, but I have enough house plants. I am going to hang on to the celery for a bit.

Buddy Holly first, this video cracks me up every time. Listen to the woman introduce the “rock and roll specialists” it kills me every time. “If you haven’t heard of these young men, then you must be the wrong age.” Keep a nice open mind, people! LMFAO!

Next we have an under appreciated Rolling Stones song. NOT SAFE FOR WORK. DO NOT PLAY THIS WHEN CHILDREN ARE AROUND. YOU HAVE BEEN WARNED.

Alright, I’m off to the crochet sweatshop! Have a good day!