Whelp, I’m in a pickle. Not just because I meant to post this yesterday. The siren song of “sit down and drink a hard cider after work” over came the desire to post about my worms. I’m in a pickle because I’m not sure how I am going to harvest this beast of a worm bin without leaving my dear wormies behind.

you could put a body in there!

finally they started eating those pants.

Last year, I dug all the compost out, did the pyramid thing, which, um, sounds fun until you realize you have like, three more hours to go. Basically, you dump your bin onto a tarp on a sunny day. Shape the compost into a pyramid, the worms dive to the middle, scrape off the sides for worm free compost, repeat until sunburn. It’s fun for like the first hour.

Sooooo, my next plan of attack was to collect the compost that seeps out of the bottom of the bin, like it did last year. Which for whatever reason is not happening this year. Damn.

Ok, now what? We used last year’s compost on the garden and this will be for the fall/houseplants/next year. So I’ve got some time to noodle something out. Thankfully, Red Worm Composting exists and it might be the most amazing worm site ever. The guy who does it is funny, interesting and very nice. Also, I think he knows everything.

For the moment, I decided to split my worm bin. One half would be completed compost, the other, fresh bedding and food. Delicious food scraps stolen from the mouth of the garbage. I freeze my scraps so they break down faster. 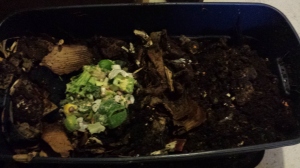 As you can see, the compost section is pretty much ready to go, if I can just get the worms out of there.

putting the worms to bed

I just really don’t want to do the pyramid thing again. I burned my butt last time. No joke. I was wearing a hoodie and pants and apparently the pants did not meet up with the hoodie and unbeknownst to me, my butt got sunburned and the aloe vera spared me a leaf. Just an FYI, aloe vera does work on sunburns. You take the fattest leaf on the bottom, split it open down the middle and scoop the goop (completely unrelated but funny link). You can save either a portion of the leaf or the goop in the fridge. So what to do this time? I might eventually give in and get a real worm house, put that on the wedding registry! But until then, I’m going to do some heavy duty reading at Red Worm Composting. There’s probably 10000000000000000000000000000000000000 better ideas there than I would ever have on my own!

That all might have to wait for another day, today we’re going out to lunch with the future Grandma In Law, which should be pretty fun. I personally love talking to older people. They are funnier than you are, dirtier than you are, they’ve done it all before and they know a whole hell of a lot more than you. Plus, sometimes you get really good cookies out of the deal. Win-win!

Have a great weekend, everyone! 😀

A Hook and a Happy Heart
DaniellaJoe's Blog